Patrick wrote two texts that we can still read today. The first is his Confessio, giving the story of his life and his mission in Ireland. The other, less well-known text is his Letter to the soldiers of Coroticus, in which Patrick roundly condemns their murder and capture of baptised Irish. He repudiates them as countrymen and calls for others to do likewise, and tells them what they can expect as Christians: “Riches, says Scripture, which a person gathers unjustly, will be vomited out of that person’s stomach. The angel of death will drag such a one away, to be crushed by the anger of dragons.”[1. Pádraig McCarthy (translator) 2003  Letter to the soldiers of Coroticus, available online. Quote from section 8. Both texts are available in the original Latin and in numerous other languages on confessio.ie.] 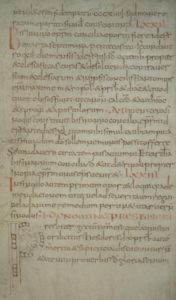 The Collectio Canonum Hibernensis from Codex 210 (folio 15v), an eighth century manuscript held in the library of the Domkapitel of Cologne. Wikimedia/Public Domain

Such anger and condemnation make it less surprising that Patrick was credited with condemnations of unjust and corrupt kings in the early eighth-century Irish collection of canons, the Collectio Canonum Hibernensis. However, these were not written by Patrick, but are extracts from a work by an unknown Irish writer working circa 650AD, De XII saeculi (“The Twelve Abuses”, also known as De duodecim abusivis saeculi, “The Twelve Abuses of the World”, hereafter referred to as De XII)[2. Clayton, M. (2009) ‘De Duodecim Abusiuis, lordship and kingship in Anglo-Saxon England’ in Saints and Scholars: New Perspectives on Anglo-Saxon Literature and Culture in Honour of Hugh Magennis Boydell and Brewer Ltd, 141-163, see pp 141-3. For primary and secondary resources relating to De XII see CODEX on vanhamel.nl. There is a list of manuscripts on earlymedievalmonasticism.org. For a more recent translation than that of Hellman (1909) see Aidan Breen (1988) ‘Towards a critical edition of De XII Abusivis : Introductory essays with a provisional edition of the text and accompanied by an English translation’, (thesis), Trinity College (Dublin, Ireland). Department of History PDF online at TARA.].

De XII is a series of short treatises outlining the sources of evil which could lead humanity to damnation and undermine justics. This work combining ethics and theology was “one of the most profoundly influential formulations of Christian political obligation in the entire Middle Ages”[3. Patrick Wormald (1986) “Celtic and Anglo-Saxon kingship: some further thoughts” in Sources of Anglo-Saxon culture (1986), pp. 151-183″ quoted in Clayton, M. (2009) on page 141.] . In his 1988 thesis, Aidan Breen found over 400 manuscript copies of De XII on the continent[4. Breen (1988), p. 234.] The National Library of Ireland lists 95 manuscript versions, dating from the 9th to the 15th century, created all over Europe[5. NLI search.]. These manuscripts are mostly ascribed to Augustine (of Hippo) and Cyprian (a 5th century bishop of Carthage), with some attributions also made to Isidore of Seville [6. CODEX on vanhamel.nl ], with the authorship now usually given as Pseudo-Cyprian (reminiscent of pseudo-Augustine aka Augustinus Hibernicus , author of De mirabilibus sacrae scripturae).

The abuses of the title fall into two categories[7. Based on Breen (1988), pp. 5-6]. The first six deal with faults of the individual:

The next six deal with faults causing disorder or immorality that threaten the society at large, caused either from individuals with responsibility like the king, or classes of people:

However De XII is believed to be Irish due to the large number of verbal and textual links between it and other Irish works in Latin. For example, there are shared concepts and phrases in De XII and writings of Columbanus, and evidence that these result from the shared use of a common source: a sixth century Irish theological treatise on Easter [8. Breen, Aidan (1987) ‘The Evidence of Antique Irish Exegesis in Pseudo-Cyprian, “De duodecim abusivis saeculi”‘, Proceedings of the Royal Irish Academy. Section C: Archaeology, Celtic Studies, History, Linguistics, Literature, 87C, 71-101. For other examples of parallels with Hiberno-Latin works see Breen (1988), pp. 8-29.], a fascinating example of a lost Irish book (for more on early Christian Irish learning see here).

De XII references the work of Isidore of Seville, and given the text is Irish that means the text must have been composed after c. 625AD, when Isidore’s works were adopted in Ireland (for more on the Irish adoption of Isidore see here).  We know it was written before excerpts of it were included as the words of Patrick in the Collectio Canonum Hibernensis between approximately 717AD and 725AD. In addition, there is evidence that De XII came from the Romani faction of the Irish Church who supported the Roman calculation of Easter over the methods traditionally used in Ireland (note section XI of the De XII above). The De XII appears to have been written after the Synod of Mag Léne in 630-631AD, where the Roman reckoning of Easter was accepted by those attending (for more on the controversy over the calculation of Easter see here)[9. Clayton (2009), p. 142-3; Breen (1988), pp. 222-31.].

It has been suggested that the twelve-fold structure mirrors and inverts the twelve step ladder of humility to heaven mentioned in the rule of St Benedict, giving the twelve steps by which humanity descends into hell. The abuses are semi-paradoxical, being flaws that go against the essence of what it means to be that individual or group: division in the one church (XI), disobedience among the young (III), the misuse of wealth by the rich (IV) and the king uncaring of his kingdom (IX) [10. Clayton (2009) p. 143.]. 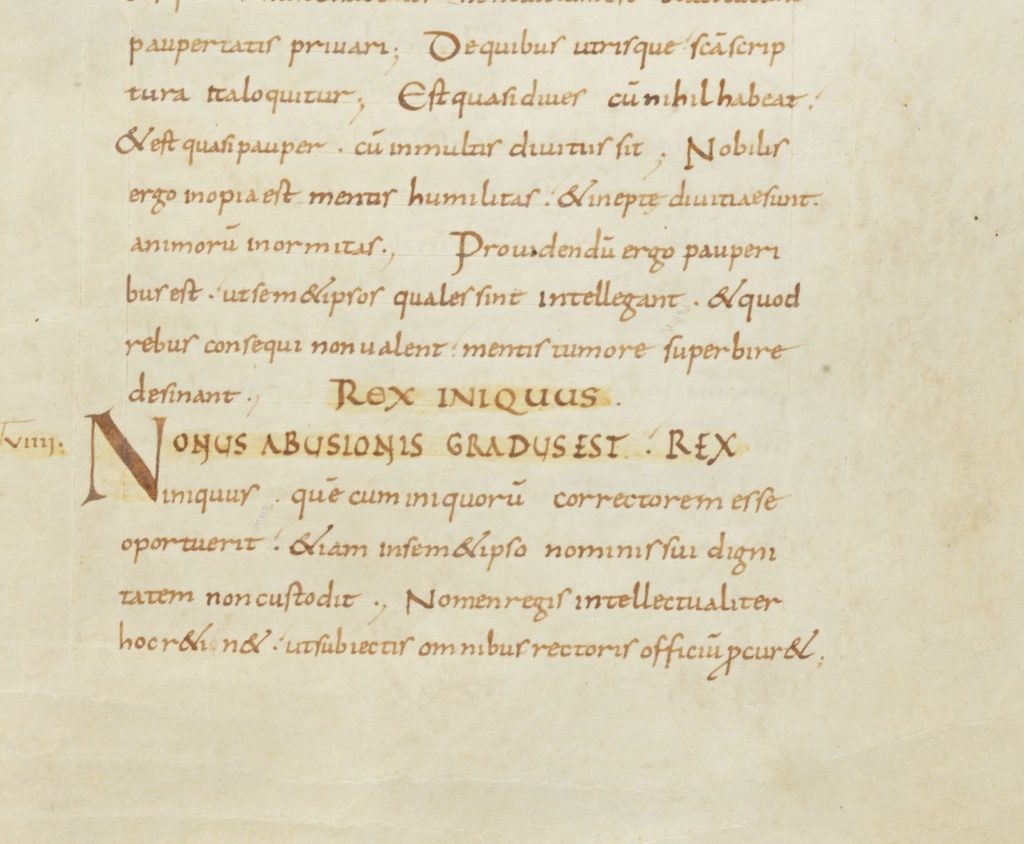 Section IX on the king has been most influential. Perhaps that was already the case in the 8th century when its words were put into the mouth of Patrick. This section fits into a genre of Irish wisdom texts advising kings on their behavious, including Morann’s Testament (Audacht Moraind) and the Instructions of Cormac (Tecosca Cormaic). All of these deal with “royal provision of justice, pre-occupation with issues of truth and falsehood linked to the concept of abundance”[11. Maxim Fomin (2009) “Wisdom-texts from early Christian Ireland: aspects of style, syntax and semantics”
Perspectives on Celtic languages pp. 161–186. Quote from p. 183. Online at Ulster University]. However, they vary in style and appear to have been composed for different purposes at different times, suggesting they are not directly connected (the later texts are not derived from the earlier De XII, for instance) nor coming from a unified earlier tradition.

A possible exception is the dependence of the prosperity of the kingdom on the virtue of the king. This is generally accepted to be derived from the Irish concept of “Ḟír Flathemon” (the Prince’s Truth), where the king who is not just and true will cause the collapse of society[12. Clayton (2009), pp. 146-7.]. This idea is not universal in Europe at the time: the early-seventh-century letter from the Visigothic king Sisebut to the Lombard king Adualuald links the Christianity of the people and their current prosperity, but not to any quality of the king himself[13. Julianna Grigg (2010) ‘The Just King and De Duodecim Abusiuis Saeculi’, Parergon, 27(1), 27-52, available: http://dx.doi.org/10.1353/pgn.0.0237. See pp. 30-5.]. On the other hand, the insular writer Gildas (c 540) uses the same threat of Solomon’s sin destroying his kingdom (I Kings 11. 11–13) as appears in De XII. It is possible that this concept is one from these islands, reworked through reading of Proverbs and other Old Testament books, with which the Irish had an affinity. In any case, there is “absolutely nothing in the ninth abuse at odds with a Christian worldview…its ready adoption all over Medieval Europe demonstrates how entirely compatible it was with Biblical thought”[14. Clayton (2009), p. 149.].

Written during a time of upheaval in Ireland as the O’Neills gathered power on the island, these texts define the duty of the king towards his people and the maintenance of contractual obligations on which status rested. The texts attempt to reconcile “existing native legal precepts with biblical concepts of justice and law”[15. Grigg (2010), quote from p. 37]. De XII enjoins the king not only to pass judgement impartially, but protect widows and orphans, lest the peace and fertility of his kingdom is lessened and he swaps his position from most powerful to most punished.

These ideas were as powerful in a Carolingian empire ravaged by war and plague as in a war-torn early Christian Ireland[16. Rob Meens, (1998) ‘Politics, Mirrors of Princes and the Bible: Sins, Kings and the Well-Being of Realms’, Early Medieval Europe, 7(3), 345.]. Not only was the XII copied, but it was one of the influences on the medieval genre of “mirrors for princes”, books of advice to rulers on how to behave, including works as varied as Sedulius Scottus’  De rectoribus christianis (On Christian rulers, c. 855-9) to John of Ireland’s The Meroure of Wysedome, (1490) and (somewhat subverting the genre) Machiavelli’s Il Principe (1530).

They continue to resonate, being invoked in a talk given at the Burren Summer School in 2010 when Professor Donnchadh Ó Corráin, speaking on power in modern Ireland, said of the De XII.

The king’s personal morality reflected his public morality. He had responsibility for moral government, justice, honesty, lack of corruption. He also had social responsibilities, to cherish the weak, the widow and the orphan. They believed that doing things right brought prosperity to society, abundant food, serene weather, social content, political stability. Evil rule and corruption brought poverty, famine, social disaster, and the destruction of the royal dynasty.

While we may not believe immorality of our leaders brings cosmic harm to us, it is as clear now as in the 7th century that our leaders “doing things right” brings benefits to us all. Its call for justice and the upholding of law, coupled with concern for the lowest in society still echoes, as does Patrick’s outrage at harm done to the innocent.

‘Whoever, indeed, does not rule the kingdom according to this law,
without doubt endures many misfortunes of rule. Therefore often (1)
the peace of his people is destroyed, and (2) scandals are stirred up
concerning his reign, and (3) the fruits of the lands are lessened, and
(4) the servitude of his people is limited.

(5) Numerous and various troubles corrupt the prosperity of his
kingdom… (9a) storms of the air and (9b) agitated skies destroy (9c)
the fecundity of the land and (9d) the supplies of the sea, and at times
(10) the blows of lightnings strip bare (10a) the crops and (10b) the
flowers and (10c) young leaves of the trees. Moreover, indeed, the
injustice of the king (11a) not only darkens the face of the present
reign, but it even casts a shadow over (11) his sons and descendants,
preventing them from inheriting the kingdom from him. (12) Because
of Solomon’s sin God scattered the kingdom of Israel’s race from his
sons’ hands, and on account of king David’s justice he left a lamp of
his seed forever in Jerusalem.’[18. Fomin (2009), p. 169.]