the Irish Revolution, which began in Easter Week, has also triumphed solely in externals. Our spiritual, cultural, and intellectual life has not changed for the better. If anything, it has retrograded.

Russell was writing from a very particular point of view. In his 1913 Co-operation and Nationality[4. Æ George Russell (1913) Co-operation and nationality, a guide for rural reformers from this to the next generation, Dublin: Maunsel (archive.org)], he identified what he saw as the key issue, one ignored by politicians (pp 70-1):

I do not know what our politicians think, but they act as if they thought that, given a constitution and the power of self-government, any group of people may become a nation, and nothing more is required.[…] So will Ireland become a nation, and all will go well with us ever afterwards. Our unstable national life will become stable. But I think it can be shown that political stability is not really maintained by any kind of constitution. […] It is the character of the social order and its effect on the daily lives of men and women in a country that we must look into if we are to prophesy political stability or chronic disorder. 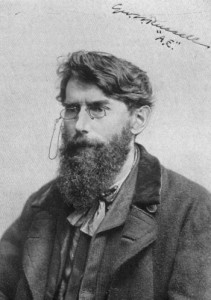 Russell argued that the ongoing flight from the land demonstrated there were serious issues in rural Ireland. While land reforms had transferred ownership of land to the farmers who tilled it, the farmers were still exploited by middlemen and those providing credit needed by farmers due to fluctuating income. Their ability to squeeze the farmer was as great as the landlords’ ever was, since the farmer’s fluctuating income required credit to enable him to live in the lean times(p. 8-13).

Russell argued that there was a cure for this: “the miracle to be wrought is a rural civilisation” (p. 7). This civilisation was to be build up by mutual aid and co-operative action (p. 7). Russell deplored the emphasis on the state: “The State [Westminster] treated Ireland as the big incapable baby it was represented to be” (quote from p. 46, see pp. 43-36). Instead co-operative movements run by the people would spearhead an agricultural revolution, ensuring a uniform standard for agricultural products and marketing them (chapter 3). Russell believed that the way land had been redistributed meant that socialism would not emerge in rural Ireland; the main danger to be averted was the emergence of a new landlord class (p. 41).

However this was only a partial solution. It was also necessary to ensure people would want stay on the land. The three requirements for these were economic development, political stability and a desirable social life (p. 53). Russell argues that the State cannot do this: instead each community must come together, decide on their own ideals, and implement them together. By co-operative action, village halls and libraries can be built. Russell asks of those who speak of working for Ireland why they would not work for the piece of Ireland they live in (pp. 67-9).

Pointing at non-political organisations such as the Gaelic League and the Co-operative Movement as the only ones with any kind of vibrancy or enlivening national life. Russell does not believe that Home Rule or sovereignty will do this (pp. 51-53). Nor will they ensure wise government, he says (p. 72):

Home Rule will not give us in Ireland any more sagacious politicians than the Union gave us, unless we have a social order which will educate the people in the choice of representatives. Every people get the type of politicians they deserve.”

To improve government, people must learn to be citizens. For Russell it is social order that builds up the social virtues.

As I have written previously, the 1916 Rising came as a shock to Russell. The execution of his friend Connolly and the treatment of Connolly’s family were the first sign of things to come. Despite his efforts as a nationalist delegate to the Irish Convention held in TCD from 25 July 1917 to 5 April 1918, outlined in Thoughts for a Convention (1917), it was impossible to find a peaceful solution.

The formation of the new Irish state in 1918 resulted in further disappointment. Most of the hoped for plans of the reformers were not realised. The law of the new state were not based on Brehon law, as Russell’s friend Sophie Bryant had hoped for. Female suffrage was not extended in time for the Treaty vote. And in the Treaty vote itself, Russell saw the spectre of more violence.

[The Gaelic movement] inspired a few heroes to fight; but the transfer of energy to the plane of physical combat weakened it; and now, when there is theoretical possibility of a Gaelic state, there are not Gaels in numbers and intellect competent to take control. The mass of people continue to think as they did before the revolution.

This problem was independent of the form of government: a republic or Free State will equally be forced to rely on the existing “technical competents of the old order” to keep the country running.

Russell also feared that the violence of the intervening years and the need to rebuild had worked against interest in cultural or spiritual ideals. Physical force cannot build these ideals, according to Russell, they require the work of imagination and intellect, work that had not been undertaken in Ireland. “We would not use the intelligence with which nature had so abundantly endowed us.”[5. Russell (1922), p. 3-4]

Russell’s great fear was that violence would proliferate in Ireland, a fear realised in the Civil War. If the virtue of the cause was enough to justify violence in its name where would it end? “If politicians refuse the democratic solution of our troubles, if they insist on force, we will have proletarian wars and religious wars.”[6. Russell (1922), p. 5]

The men who built the Irish state in the 1920s and 1930s were not socialists like Connolly or radical educationalists like Pearse or feminists like Markievicz. The people who ran the State in 1922 were in large part the same or similiar to those who ran it in 1913. Perhaps Russell was right, the revolution came too early. On the other hand, if attempts had been made to push through changes without the competence to back them up, the results might have been as disastrous as ideologically driven changes in Russia of the 1920s and 1930s proved to be.

George Russell left Dublin in 1933, after the failure of the Irish Statesman, the pro-Treaty paper he edited, ; the deaths of his wife, of Horace Plunkett and of other old friends; and the decline of the Irish co-operative movement. He died in an English nursing home on 17th July 1935.

Was it for this etc pic.twitter.com/c4wz1r9AJv