Sophie Bryant (née Willock) was a true renaissance woman – suffragist, educationalist, mathematician, psychologist, theorist and “one of the most sophisticated and perceptive of the revivalist thinkers” [1. Thomas Duddy (2002) A history of Irish Thought, Abington:Routledge, p. 288.] Born in Sandymount, near Dublin, on 15 February 1850 to Revd William Alexander Willock, a mathematician and fellow of Trinity College Dublin, and his wife, daughter of J. P. Morris of Skreen Castle. The family moved to London when Bryant was thirteen.

She married in 1869, but her husband died the next year. She was appointed to teach mathematics in North London Collegiate School, confounding the popular idea that girls were not suited for mathematics by sending a succession of girls to study the subject in Girton. She studied for her own degree at the same time, taking a BSc (London) in 1881 with a first in mental and moral science and a second in mathematics. Three years later she became the first woman to be awarded a DSc (in psychology). She became headmistress of the North London Collegiate in 1895, and was active in the development of education, including teacher training [1. Sheila Fletcher (2004) ‘Bryant , Sophie (1850–1922)’ in Oxford Dictionary of National Biography, Oxford University Press]

“Bryant’s feeling for freedom as ‘the condition of all development’ infused her teaching, her patriotism, and her support for women’s suffrage”. She was president of the local committee of the National Union of Women’s Suffrage Societies. She worked towards extending the Irish movement towards higher education for women by securing the support of Catholic convent-school nuns.[2. Fletcher (2004)]

She wrote on a wide range of topics. The vast bulk of her writing was on education, including moral education [3. See RICORSO for a bibliography: Sophie Bryant. Also see her papers on JSTOR.]. She wrote on symbolic language and on the relationship of logic and mathematics, drawing on George Boole’s work. [4. Sophie Bryant (1888) “On the Nature and Functions of a Complete Symbolic Language” in Mind, Vol. 13, No. 50 (Apr., 1888), pp. 188-207. Sophie Bryant (1902) The Relation of Mathematics to General Formal Logic (1902) in Proceedings of the Aristotelian Society, 01/1902, Vol. 2, pp. 105-143.] Her papers on psychology cover such topics as emotions, sympathy and consciousness.

However “Ireland was in the heart of her heart”[5. Sir Michael E. Sadler quoted in Fletcher (2004)], and Bryant’s greatest achievement philosophically speaking was in “the innovative national inflection she gave to understandings of the relationship between self, philosophy and society”[6. Luke Gibbons (2004) “Bryant, Sophie (née Willock: 1850-1922) in Thomas Duddy (ed) Dictionary of Irish Philosophers, Bristol Thoemmes, p. 45]. Her first book in the Irish Renaissance vein was Celtic Ireland (1889). This outlined Irish history, avoiding exaggerated claims of Irish importance, but showing that the Irish were not merely barbarians and successfully ruled themselves. It also contained Bryant’s first writing on Gaelic psychology (see quote re Eriugena here).

Her thoughts were expanded into “one of the more original contributions to the cultural debates of the Irish Literary Revival”[7. Gibbons (2004), p. 45]: The Genius of the Gael: A Study in Celtic Psychology (1913). This book is of its time: Bryant starts by distinguishing between “racial units” and “composite nations”, races being formed from a “process of mixed hereditary and education” (education including common environment and culture)[8. Bryant (1913), p. 13-14]. However, the nature of the traits she ascribes means that culture plays an important part in the story.

The rest of the book concentrates on the Gaelic race, and in doing so subverts the stereotype of the illogical and self-contradictory Gael. Luke Gibbon summarises[12. Gibbons (2004) p.45]:

Drawing on her psychological studies of the self in the leading philosophical journal, Mind, and her theories of national sentiment published in Dublin University Review, Bryant argued that this characteristic [self-contradiction] of Irish people had to do with a steadfast refusal to engage in self-censorship, or to internalize social authority.

The Irish person, said Bryant, “corrects himself, not by subpression, but by some new form of expression”[13. Bryant (2013), p. 46]. Rather than inhibiting, the Irish personality needs to develop, requiring “a sphere of social life in which to express himself…[which] teaches him balance, correcting the emphasis he impresses on it by some other emphasis which it suggests”[14. Bryant (2013) p. 51], and the more rich the world, the more developed the personality becomes. Thus culture is important in the development of the Gael. As Gibbons argues, identity is therefore not a given and the whole description can be read, not as biology, but as the natural reaction of the colonised, who “have little choice but to fashion their identities in the presence of others”[15. Gibbons (2004) pp. 45-6. It should be noted that Bryant herself argued that the Gaelic “psychological quality is no doubt correlated with a physiological quality i.e. a high tension in the nervous structures…Thus it may be that our quick-witted Irishman is what he is because he differs from the Teuton in the very quality of his nerve structure” – Sophie Bryant (1897) “The Celtic Mind” in Contemporary Review, 72, p. 538.].

Bryant emphasises the “Celtic gift of accurate imaginative sympathy” [16. Byrant (1913), p. 69], an consciousness of the other which Gibbons contrasts with sympathy as used in the Scottish Enlightenment, which, despite its acknowledgement of the other, also involved managing ones self-presentation towards the general norm, fixing and stabilising identity[17. Luke Gibbons (1996) “This Sympathetic Bond: Ossian, Celticism and Colonialism” in Terence Brown (ed) Celticism, AT: Rodopi, pp. 273-282.].

Bryant therefore is not necessarily conforming to existing stereotypes or “deferring towards the ideas and institutions of the past” [18. Duddy (2002) p. 288]. However note should also be taken of the political importance of the work. She looks to the Irish Renaissance to draw the people of Ireland together “divided as they are today by a political controversy”[19. Bryant (2013), p. 22]. The power of the Gael to integrate incomers and the resulting shared social culture give a rationale to seeing the people of Ireland as one nation (in the tradition of Thomas Davis), even if they are not one race. Later chapters outline the Irish abilities socially, in politics and in the literary sphere, exploding any idea of Gaelic incompetence. A chapter on Irish law refutes the charge of primitiveness laid against the Brehon laws. 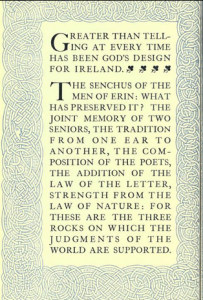 The chapter on law was to be expanded in Bryant’s posthumously published Liberty, Order and Law under Native Irish Rule (1923). In the foreword Bryant writes that the book:

has…been written throughout in the hope that it might prove to be of interest – perhaps even of service – to my countrymen and countrywomen in the work of social reorganisation which lies before them, and to which so many of them have already put their hand.

Like James Creed Meredith, Sophie Bryant was an advocate of introducing aspects of the Brehon system into Irish law. However it should be noted that neither wanted a complete reintroduction of the original law, which was non-egalitarian. In addition, Bryant viewed the law as more friendly to women than would now be thought to be the case: [20. Neil McLeod (2005) “Brehon Law” in Sean Duffy (ed) Medieval Ireland: An Encyclopedia, London: Routledge, p. 72]

It is sometimes claimed that the status of women in early Irish law was considerably more advanced than that in comparable medieval cultures. But that claim finds little, if any, factual support in the laws. Most legal rights were dependent on the ownership of property, and most property was owned by men.

That said, this was a common trait in Ireland at the time (compare with Pearse’s theories of education in line with contemporary practise and justified with reference to the past.) Eoin O’Neill reviewed the book in 1924, and agrees with Bryant that women had a “remarkable” range of rights. He disagrees that Brehon Law is tribal, entirely customary, judicial authority is purely consensual, all judgements are assessments of damages and that the term céle refers to a tenant. He notes however that Bryant is concerned more with the spirit that underlies that underlies the provisions of Irish Law and with the effect of Irish law on education and character”, and concludes that “subject at least to the reservations that I have stated it is solidly instructive”[21. Eoin MacNeill (1924) “Sophie Bryant – Liberty, order and law under native Irish rule”, Studies: An Irish Quarterly Review, Vol. 13, No. 49, pp. 156-160].

Sophie Bryant was not just an intellectual woman, but one who loved physical freedom. As well as rowing and cycling, she loved to climb, reaching the summit of the Matterhorn twice. On holiday in Chamonix in August 1922, she went missing. Her body was found on 28th August. Her date of death is recorded as 14th August 1922[22. Sheila Fletcher (2004)] .

AE and Sophie Bryant (1912) Co-operation and Nationality: A Guide for Rural References from This to the Next Generation, Dublin: Maunsel & Company (pamphlet)

Sophie Bryant (1913) The genius of the Gael; a study in Celtic psychology and its manifestations, London: T. Fisher Unwin. [archive.org]

Sophie Bryant (1913) Liberty, order and law under native Irish rule : a study in the book of the ancient laws of Ireland [archive.org]