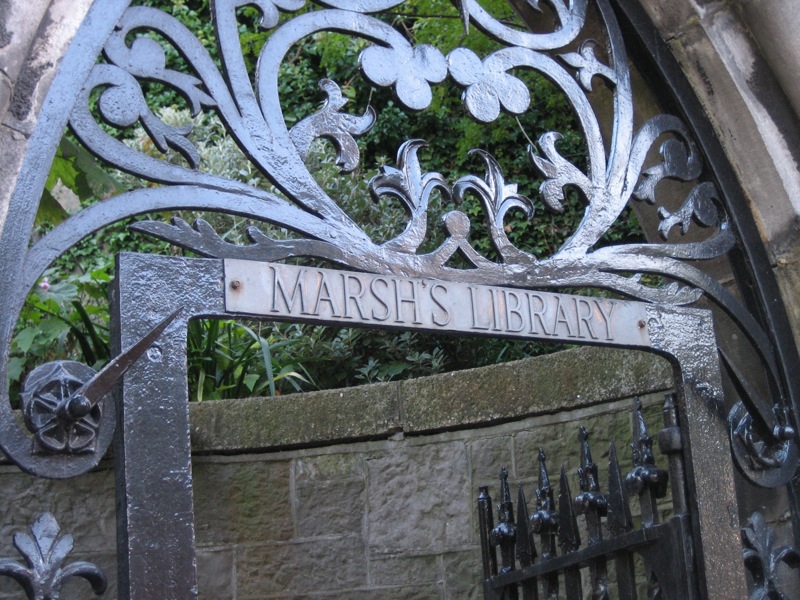 The current exhibition in Marsh’s Library (ends 30th June 2013) displays science books from their collection. Given that “science” as a term only replaced “natural philosophy” in the mid 19th century, there are many books by philosophers included. So as well as treatises by Johannes and Elisabetha Hevelius, Galileo, Kepler, Tycho, and a 14th century Irish translation of an astronomical treatise based on Arab works, there are also books of Aristotle (translated and with a commentary from Averroes), Lucretius’ Epicurean poetry, Pascal, Descartes and Gassendi. Robert Boyle’s complete works can been seen, as well as William Molyneaux’s (1690) Treatise on Dioptricks, dedicated in the author’s handwriting to Narcissus Marsh himself.

Marsh’s Library was the first public library in Ireland. Marsh had long contemplated a library for “publick use, where all might have free access seeing they cannot have it in [Trinity] College”. The library (the tour guide informed us) was open to all, regardless of religion. 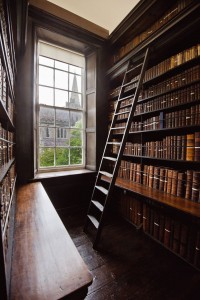 Marsh donated his entire collection of over 10,000 volumes, including the collection of Bishop Edward Stillingfleet which he had bought for £2,500, to the public library. The first librarian, Dr. Elias Bouhereau, a Huguenot refugee who fled France in 1695, was the first librarian, and also donated his library. An additional bequest was made in 1745 by John Sterne Bishop of Clogher.

The contents of the library reflect the interests of the men involved, and the changing focus of the times. Exploring the catalogue shows us that Marsh had Descartes’ Geometria reflecting his mathematical interests, whereas Bouhereau had eight of Descartes works, including the Discourse on Method, Meditations and Principles.  Bouhereau had a copy of Le saint, sacré, universel et general concile de Trent, describing the Council of Trent from the Roman Catholic point of view, Stillingfleet who was involved in arguing for Anglican orthodoxy, had a copy of The Council of Trent examined and disproved by catholic tradition. All three have copies of Lucretius’ Epicurean poetry, while Stern did not, but Stern was the only one to have a book by Spinoza (the Renati Des Cartes principiorum philosophiae).

The collection does not contain only Enlightenment philosophers or material for polemic. Archbishop Ussher is one of the scholastics represented in the collections of Marsh, Stillingfleet and of Stern. The Irish Franciscans in Rome had done extensive work on the thought of the medieval theologian John Duns Scottus; one of these Franciscans, Luke Wadding, is represented in both Marsh’s and Stillingfleet’s collections. Stillingfleet also had Cork-born Louvain professor John Sinnich’s book on practical morality, Saul exrex sive de Saul Israeliticae gentis protomonarchai. Historical works by expatriate Irish Catholic authors are also included, with works by Stanyhurst and O’Sullivan appearing in the library. Dr Thomas O’Connor has made a detailed exploration of the Irish Catholic element in Marsh’s Library. It is an element that tapers out into the eighteenth century:

After the furious debates of the seventeenth century, the penal laws, a reaction to war, became, in peace, an all too successful barrier to exchange which meant that, on the intellectual level, both communities developed without much reference to one another, apart from the customary exchange of annual insults. 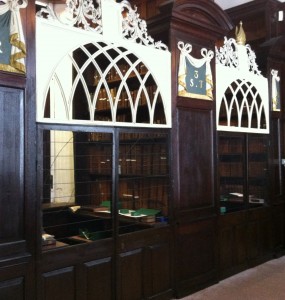 Marsh’s Library was built in 1701-3 and was designed by Sir William Robinson (d.1712) the Surveyor General of Ireland. It is one of the very few 18th century buildings left in Dublin that is still being used for its original purpose. It was protected by an act passed by the Irish legislature in 1707 – “An Act for Settling and Preserving a Public Library for ever“. The interior is still much as it was when opened, with many books on the same shelves Marsh and Bouhereau originally placed them. However the cages, where readers were locked in to prevent theft, are no longer in use.

Narcissus Marsh had been a provost of Trinity College

One thought on “Philosophy in Marsh’s Library”